Treasurer Josh Frydenberg is hoping historically high household saving levels and strong consumer sentiment will continue to stimulate the economy as government support tapers down. The household saving-to-income ratio dipped to 11.6 per cent from 12.2 per cent in the March quarter and about 20 per cent at the height of the pandemic, but is still well above prepandemic levels of about 5.3 per cent.

‘‘Households have reduced their savings ratio, but not by a lot,’’ Mr Fryden- berg said following the release of the March quarter national accounts. ‘‘We would expect as conﬁdence continues to build and restrictions ease, then that number can come down in the future.’’ The Reserve Bank of Australia last month said how households treat this money – whether they spend it or add it to household wealth – was a source of uncertainty for central bank forecasters. ‘‘Members agreed that an important source of uncertainty for the domestic outlook was the path for household consumption,’’ the RBA said in the minutes of its May board meeting.

Businesses are conﬁdent about future demand, with retailers and wholesalers looking to boost their inventories over the ﬁrst three months of the year. Inventories grew 2.1 per cent over the quarter, according to the Australian Bureau of Statistics, adding an upside surprise to GDP of 0.7 percentage points. The economy grew 1.8 per cent in the March quarter, well above economist expectations.

‘‘Inventories made a solid contribution to growth in the quarter, likely reﬂecting restocking by the goods distribution industries following supply disruptions amid strong demand over the past year,’’ NAB chief economist Alan Oster said.

Leigh Williams, the founder of eStore Logistics which operates ware- house and e-commerce order fulﬁlment services for major retailers, has been on the front line of the buy-up.

Mr Williams said his business started to notice an uptick on inventories in the ﬁnal quarter of 2020 that ﬂowed through into the following year. ‘‘It’s been a roller-coaster ride. In May or June last year our warehouses were at three or four-year lows in terms of percentage capacity because of all the supply chain disruptions.

‘‘We were concerned at that point about underutilisation, now it’s really swung the other way.’’

EStore Logistics has had to open three new distribution centres in recent months to keep up with demand.

‘‘If you look at retailers with strong balance sheets, these are the ones that have really invested deeply in inventory and this is leading that environment for additional warehouse capacity,’’ Mr Williams said.

‘‘There’s a pretty big grab for industrial properties to hold inventory holdings.’’ However, he expected retailers to begin selling down their stocks over coming months.

Household spending increased 1.2 per cent and added 0.7 percentage points to GDP growth, according to the ABS, and while spending on goods declined 0.5 per cent, it remains well above pre-pandemic levels.

Mr Frydenberg hopes households will continue to use their savings to boost spending on goods and services. 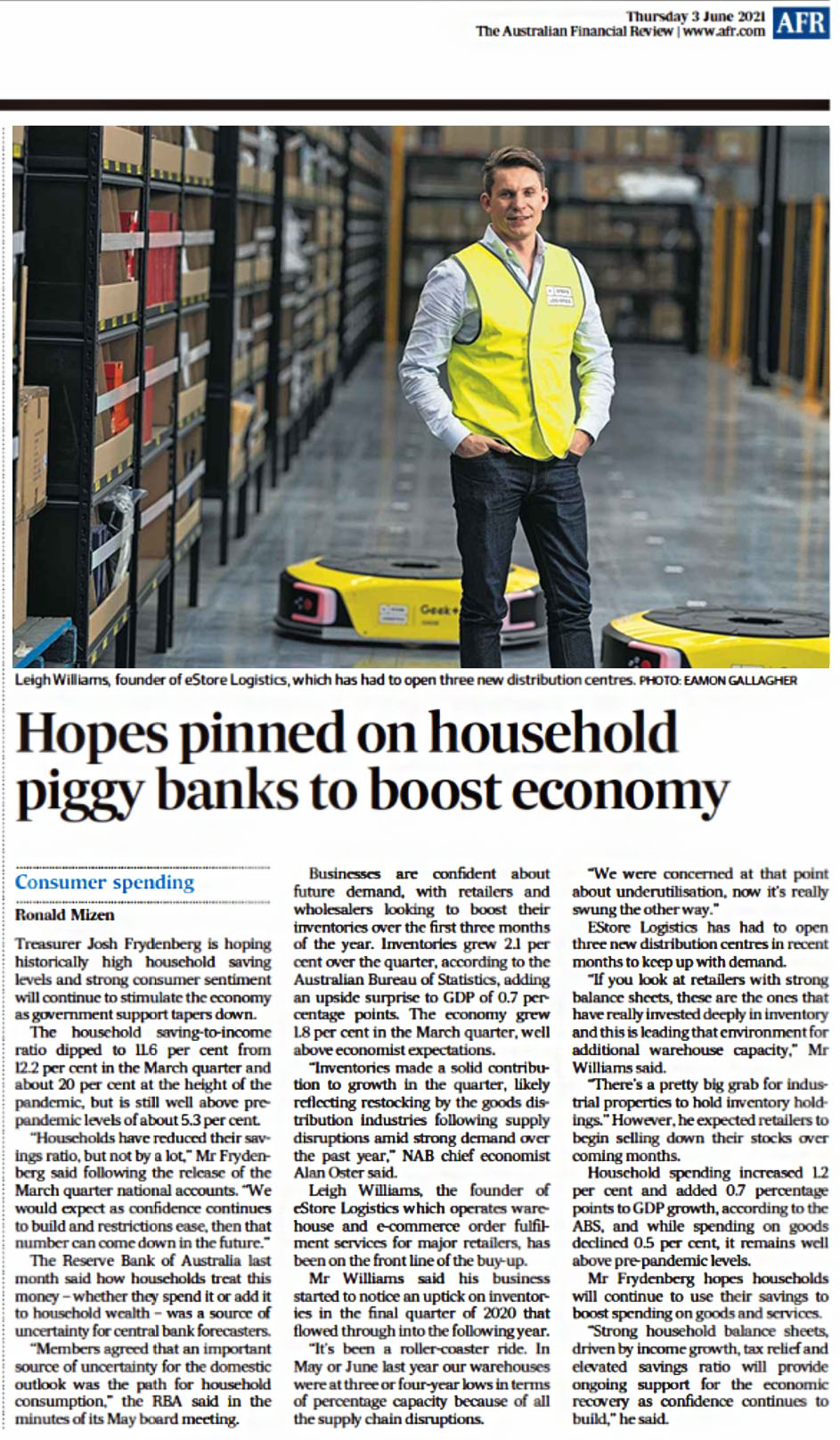